I was excited to curl up and watch my all-time favorite movie, feeling cozy and content. But as soon as I turned on my TV, I was immediately disappointed when I noticed a black screen. Frustrated and annoyed, I checked the backlight on my TCL TV and was shocked to find that it wasn’t working at all.

I tried everything I could to fix the issue, unplugging and replugging the TV, but no matter what I did, the backlight just wouldn’t turn on. This was such a major inconvenience, and I was so disappointed that I couldn’t fully enjoy my movie.

I knew I needed to take more drastic measures to fix the problem. So, I searched online for solutions and found some helpful tips on how to troubleshoot a TCL Roku TV backlight not working. I followed the instructions and eventually found that the issue was with the backlight inverter or with the backlight itself.

However, I wasn’t sure what my TV’s problem was: a faulty inverter board or a faulty backlight. So, I decided to test some components, like ensuring whether my backlight was faulty or not.

In this article, I will describe the process I took to understand and troubleshoot my problem. I hope this may also help you to troubleshoot your problem.

TCL TV backlight is not working (Testing the parts) 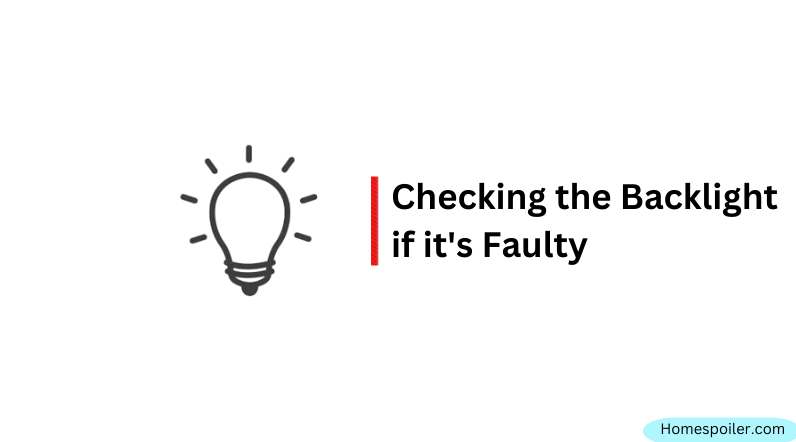 To begin with, I wanted to determine the cause of my TV’s screen being black. I had a hunch that it might be related to the backlight, so I decided to check it first.

I grabbed a flashlight and brought it close to the screen, shining the light directly onto the surface. As I looked closely, I noticed that a faint image was visible, but it was extremely dim and hard to see. This led me to conclude that my TV’s LED backlight had been damaged, possibly due to a sudden surge of electricity.

To confirm this, I continued to shine the flashlight on different areas of the screen and noticed that the image became clearer as I moved the light closer to the center of the screen. This further confirmed that the backlight was indeed the issue, as it is responsible for illuminating the entire screen and producing a clear image.

If you can’t see the faint image on your TV’s screen after following the above procedure, your TV’s Backlight inverter has been damaged.

What causes TV’s backlight to be damaged?

There are several reasons why your TCL TV’s backlight can be damaged. These includes:

So, what’s the solution? 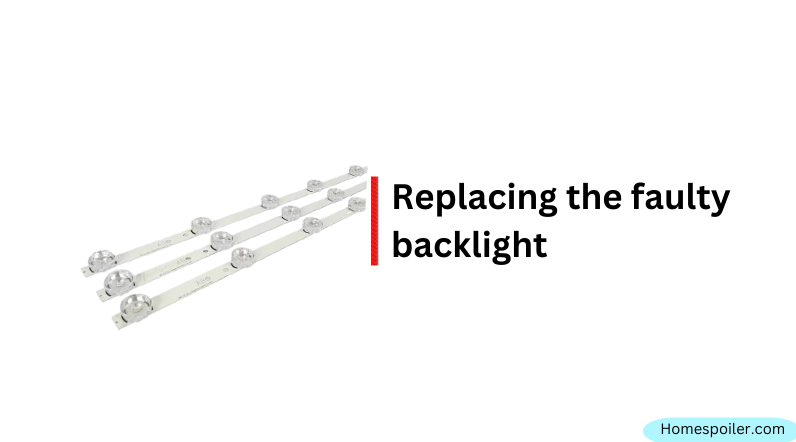 Hand it over to an experienced TV repairer! Yes, you heard right. Because if you do it yourself, you will need to disassemble both the back and TV display panels. This can be a delicate process, and if you are not careful or do not have the necessary experience, you may end up damaging your TV beyond repair.

To avoid this, hand your TV over to an experienced repairer. Professionals have the skills and knowledge necessary to safely disassemble and repair your TV, ensuring that it is returned to you in good working condition.

Have enough experience to do this yourself? Excellent!

Here’s how to replace your TCL Roku TV’s backlight

You will need a screwdriver, replacement LED flexible strips, wires, and a soldering iron.

Warning: You are going to disassemble your TV. It may lead to serious damage if you make any mistake.

Abdul Kader is the CEO and founder of Homespoiler.com. With his expertise in electronics repair, he provides in-depth information on how to fix appliances, wiring, and other electrical-related issues. More about us